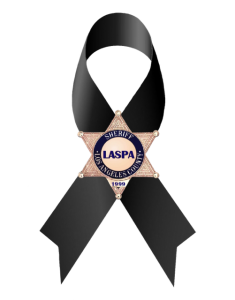 We Remember Our Fallen

Sheriff’s Relief maintains the following funds for our fallen officers and their families, should you wish to make a donation: 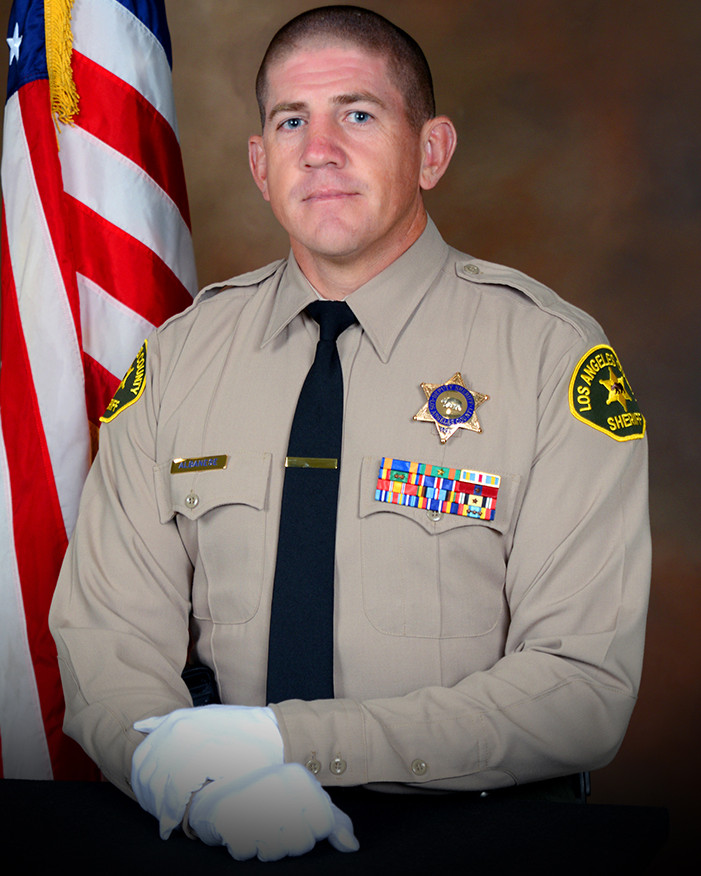 Deputy Sheriff Thomas Albanese, a seven-year veteran with the Department, was tragically killed when his motorcycle collided with vehicle at the intersection of Del Amo Boulevard and Paramount Boulevard in Lakewood.

Deputy Albanese was a veteran of the United States Marine Corps and is survived by his wife and two young sons. 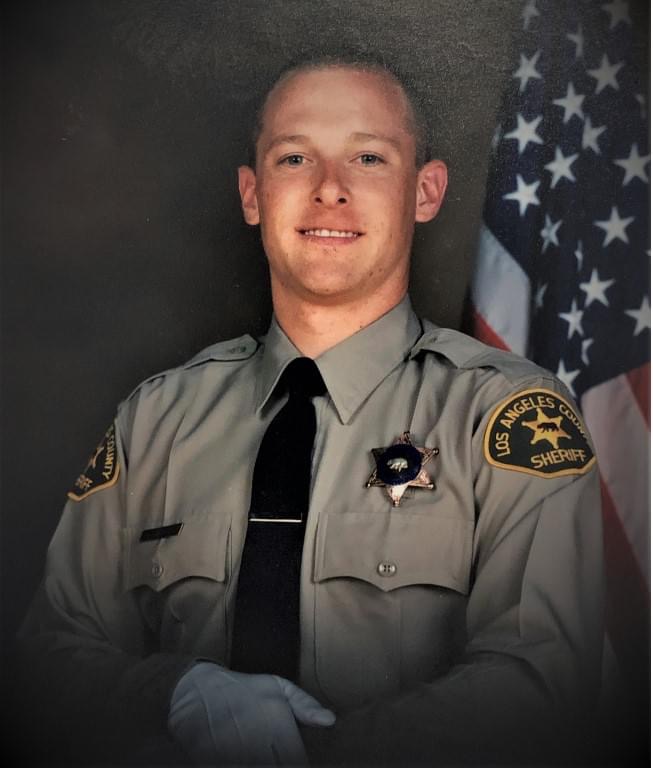 Deputy Dennis Gill was killed in a traffic collision in Oregon, while vacationing with his family.  Deputy Gill’s 14-year-old daughter was also killed in the collision.  He is survived by his wife and 11-year-old son who were not injured. 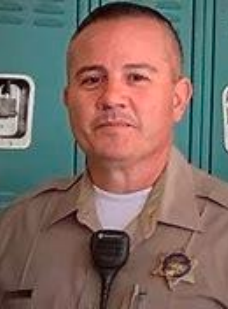 Deputy Joe Solano succumbed to injuries received after being shot on June 10, 2019.

While waiting in a fast food drive-thru, the suspect approached Deputy Solano’s vehicle and shot him in the head.

Deputy Solano is survived by his fiancee, son, a step-daughter and his mother. 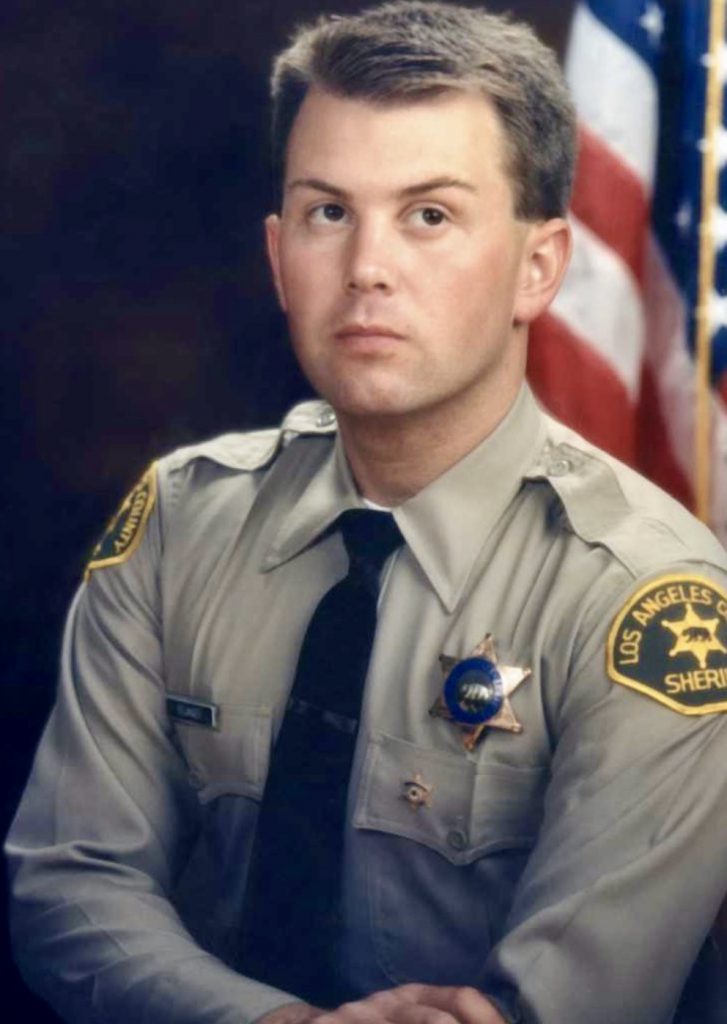 Deputy Steve Belanger succumbed to injuries sustained on December 10, 1994.  While on patrol in Rowland Heights, California, Deputy Belanger conducted a traffic stop involving an individual he recognized as being wanted for a prior assault.  As he searched the occupants of the vehicle, a friend of theirs road up behind Deputy Belanger on a skateboard and shot him in the head.  The suspect fled the scene and committed suicide hours later.  Doctors were unable to remove the bullet from Deputy Belanger’s brain; he remained confined to a wheelchair and under constant medical care.

He is survived by his wife and daughter.

Sergeant Al Lopez passed away Monday, October 24, 2016. Sergeant Lopez was responding to assist deputies involved in a pursuit, when he lost control of his vehicle and crashed.

Sergeant Lopez was a 27-year veteran of the Department and leaves behind a wife and two children.

Sergeant Steven Owen was killed in the Line-of-Duty in on October 5, 2016, while answering a burglary report. Sergeant Owen was a 29-year veteran of the Department and is survived by his wife, three children and Mother. 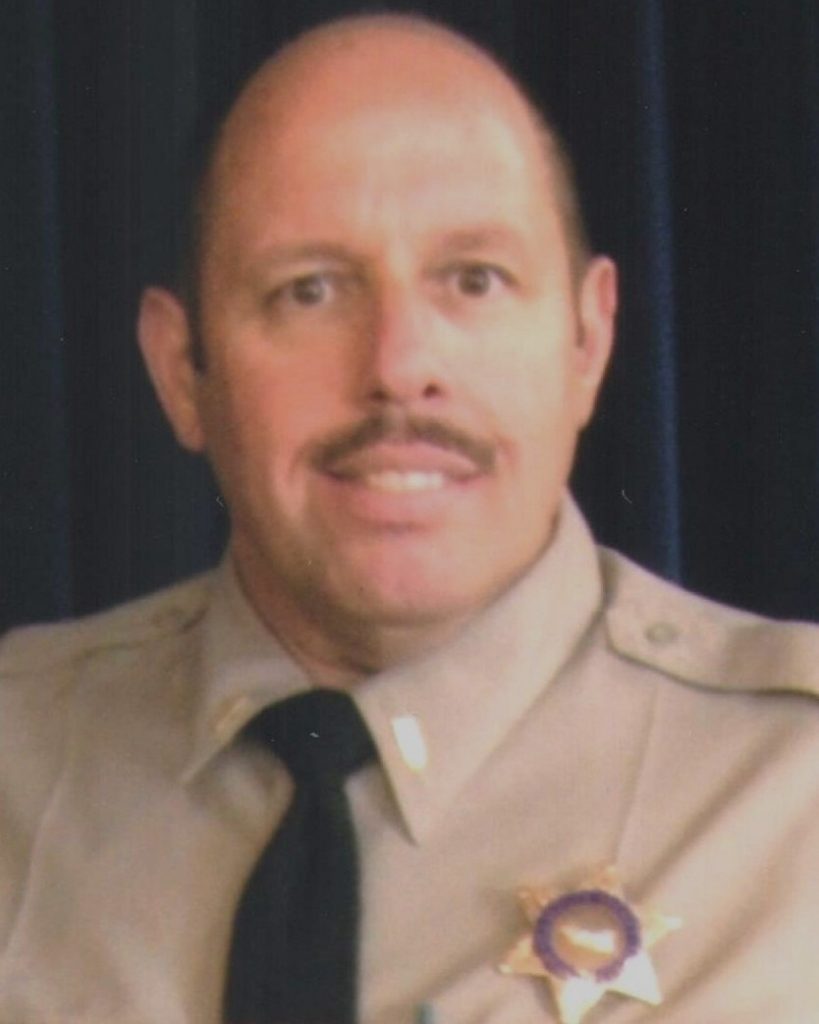 Sergeant Pat Libertone was a 31-year veteran of the Department.  He was effecting a traffic stop of a reckless driver on the freeway.  As he walked back to his patrol car, he suffered a heart attack.  An off-duty paramedic happened to witness the event and stopped to render aid unsuccessfully.

Sergeant Libertone is survived by his wife and four children. 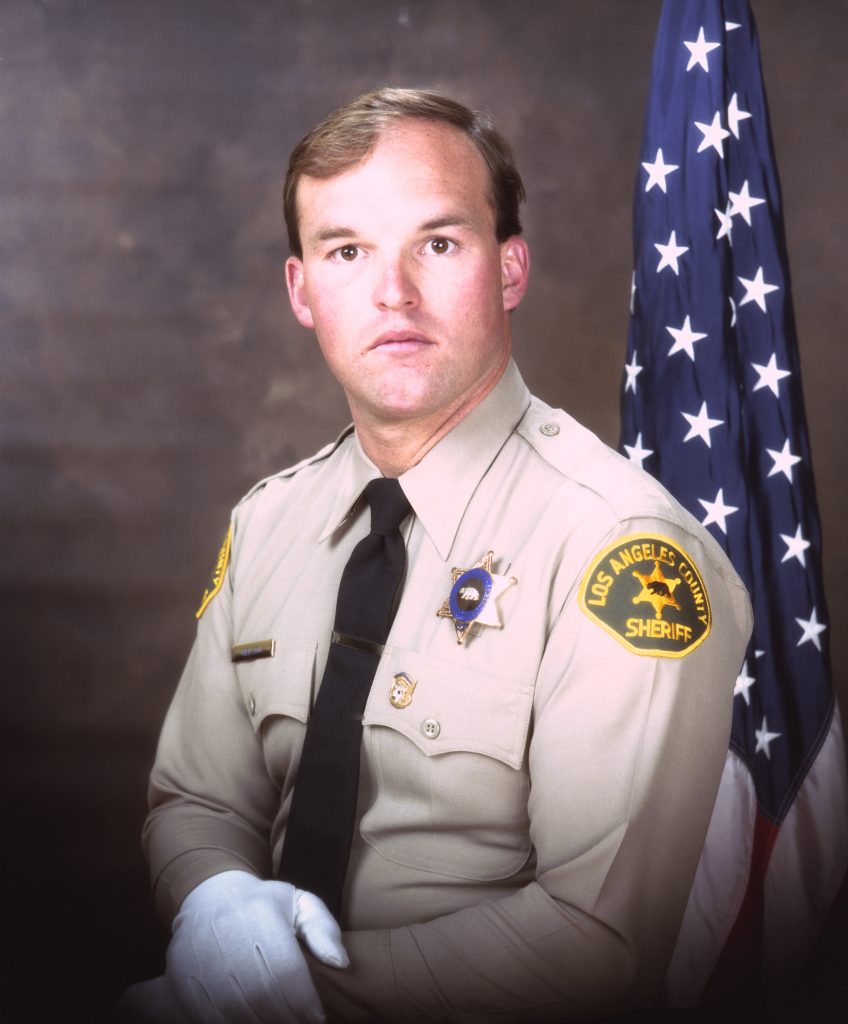 Deputy David Nelson was a 22-year-old veteran of the Department.  On August 11, 2011, Deputy Nelson lost control of his vehicle and succumbed to injuries sustained in the collision.

Deputy Randy Hamson succumbed to injuries sustained after being struck by a vehicle on August 16, 2004.

Deputy Hamson had been investigating a traffic accident, when he saw an oncoming car driving without its headlights on. As he stepped into the roadway to get the driver’s attention with his flashlight, he was struck by another car.

He remained in a coma in a long-term care facility until succumbing to his injuries.

Deputy Hamson had served with the Department for 5 years at the time of the accident. He is survived by his wife, two sons, parents, and two brothers.

Deputy Juan Escalante was shot and killed when he was confronted by two armed gang members in front of his home as he prepared to leave for work. Deputy Escalante drew his weapon and identified himself as a deputy before being fatally shot.

Deputy Escalante was assigned to the Men’s Central Jail and it is believed he may have been targeted by a gang as part of his duties. Two suspects were arrested in connection with his murder.

Deputy Escalante had served with the Department for 2.5 years. He is survived by his wife and three children.

Deputy Gama was conducting a surveillance in North Hollywood, when a Honda Element rear-ended his parked county minivan.  Deputy Gama died as a result of injuries sustained in the collision.

The 18-year-old driver of the Honda was arrested on suspicion of vehicular manslaughter while driving under the influence of alcohol or drugs.

Deputy Gama was killed on the 20th anniversary of his graduation from the Sheriff’s Academy.

He is survived by his wife and four children.

Deputy David Piquette was tragically killed in a traffic accident while traveling to work on the 91 freeway.

The suspect, who had just stolen a shipment of new appliances from a construction site, failed to secure a large stove, which fell out of his truck onto the freeway.  As Deputy Piquette swerved to avoid the appliance, he collided with another vehicle.

The suspect was charged with second-degree murder.

Deputy Piquette was a 10-year veteran of the Department and is survived by his wife and two children.

Deputy Paul Wilms, a 17-year veteran of the Department, was accidentally killed while cleaning his weapon, in the Community Service Center at Industry Station.

He is survived by his wife, daughter and son.

On Tuesday, March 28, 2006, Deputy Maria Rosa, assigned to the Inmate Reception Center, was found shot in the City of Long Beach and subsequently died from her injuries.

Shortly after 6 A.M., Long Beach Police personnel responded to the 2900 block of South Eucalyptus Avenue regarding a person down. Upon their arrival, officers discovered Rosa in front of the residence suffering from a gunshot wound. Rosa was immediately transported to a local hospital where she, unfortunately, succumbed to her injuries.

On May 8, 2008, the suspect who shot Deputy Rosa was convicted of first degree murder and sentenced to death.

Deputy Rosa had served with the Department for six years. She is survived by her sister and two brothers.

Deputy Pierre Bain was killed in a motorcycle accident when he was attempting to pull over a speeding motorist.

Deputy Bain was following a speeding car at approximately 1730 hours when he entered the intersection of Avenue K and 20th Street on a green light. A car alongside him veered into his lane. Deputy Bain swerved to avoid the car, but the car just nipped the motorcycle, causing it to crash. The motorcycle hit a tree, and Deputy Bain was thrown off the bike and into another tree, then into another, and suffered massive injuries. He was transported to Antelope Valley Medical Center where he was pronounced dead.

Deputy Bain had served with the Department for 14 years. He is survived by his wife, three daughters, and his parents.

Deputy Jerry Ortiz, a 15-year veteran of the Department, was shot and killed after knocking on a door during an investigation.

Deputy Ortiz had gone to an apartment complex in the city of Hawaiian Gardens to question a woman about a shooting that had taken place the previous day. As he spoke to the woman at the door of the apartment, the suspect in the previous day’s shooting appeared and shot him in the head. The man then fled into an apartment three doors away. Deputies found him hiding in a bathtub three hours later.

The suspect was on parole and had prior arrests for convictions for assault with a deadly weapon, resisting arrest, burglary, firearms violations and drug crimes.

In April 2007 the suspect was found guilty of capital murder and sentenced to death.

Deputy Ortiz is survived by his wife, two sons, and mother.

Deputy James Tutino was killed during a Metrolink train derailment, while on his way to work at Men’s Central Jail.

The suspect who caused the derailment testified that he meant to commit suicide by parking his SUV on the track, but changed his mind and was unable to move his vehicle.  Therefore he abandoned it and ran from the scene.

The train derailed when it struck the vehicle and then struck an oncoming commuter train, causing it to derail as well. The suspect was arrested a short time later and charged with arson and 11 counts of homicide.  He was sentenced to 11 consecutive life sentences without parole.

Deputy Tutino had served with the Los Angeles County Sheriff’s Department for 23-years. He is survived by his wife, five children, five grandchildren, parents, brother, and sister.

Deputy Michael Arruda died of a gunshot wound he sustained six-days earlier, when he was accidentally shot by another deputy.

Deputy Arruda and three deputies responded to a motel in Hacienda Heights on June 9, 2004, after receiving a call that someone was firing shots and threatening people. When the deputies arrived, they went to the unit where the suspect was reported to be staying. As they walked toward the unit, the suspect exited carrying a pellet pistol that closely resembled a .40-caliber semiautomatic handgun. The suspect began firing at the deputies. The deputies returned fire, killing the suspect. One of the rounds fired by the deputies struck Deputy Arruda in the neck, seriously wounding him.

Deputy Arruda had served with the Department for 13 years. He is survived by his son, daughter, fiancée, parents, brother, and sister.

Deputy Stephen Sorensen, a 12-year veteran of the Department, was following up on a trespassing call shortly after 12:30 p.m. near Highway 138, east of Palmdale. A witness reported hearing about a half dozen gunshots and called authorities. Deputies at the scene located Sorensen’s unoccupied patrol car, and found Sorenson’s body nearby within an hour.

Deputy Sorensen had been shot in the upper torso and was pronounced dead at the scene. It was unclear whether he had been in a gun battle with the suspect or if he was ambushed. The hazmat team rolled out nearby the location where the incident took place regarding a possible meth lab.

A suspect, Donald Charles Kueck, 52, who had a lengthy criminal record, including arrests for resisting arrest and assault on a peace officer was later located at his home, where he engaged deputies in a fire fight. Tear gas was fired into the house, setting the house on fire and burning it to the ground. A burned corpse was located in the ashes, later identified as the remains of Kueck. Prior to the fire fight, Kueck admitted in a phone call that he had shot and killed Deputy Sorensen. Deputy Sorensen leaves his wife Christine, an adult son, and an adopted 2-year-old son.

Deputy David Powell, an 18-year veteran of the Department was killed while investigating a call of shots being fired near a residence. As Powell approached the home, he was shot in the right arm.  The bullet traveled down the seam of his protective vest and entered his chest cavity. He was rushed to the hospital but efforts to save his life were unsuccessful.

Deputy Powell leaves behind a wife and four daughters.

Deputy David March, a seven-year veteran of the Department was shot and killed while attempting to conduct a traffic stop.

Deputy March initiated the traffic stop at Live Oak and Peck Road in the city of Irwindale. The driver of the vehicle exited his car and met Deputy March halfway between the patrol car and the suspects vehicle. A confrontation ensued and the suspect produced a handgun, firing at Deputy March several times striking him in the upper torso. The suspect, who had stated to friends that he wanted to kill a police officer during a traffic stop, fled the scene and was later located in Mexico.  He was arrested four years later and extradited to the U.S. where he was sentenced to life in prison without parole.